slaughtering is defined as a act of  killing or butchering of animal especially for the reason for consumption(food).The killing of large number of animals when animals are old enough they are sent to slaughter and there meat is processed and shipped to stores. 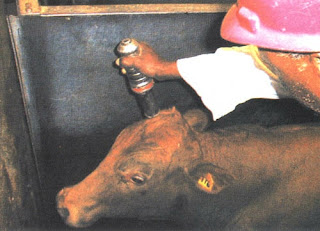 A captive bolt pistol or gun(also variously known as a cattle gun,stun bolt gun,bolt gun or stunner)is a device used for stunning animal prior to slaughter.
The goal of captive bolt stunning is to inflict a forceful strike on the forehead with the help of bolt in order to induce unconsciousness .The bolt may or may not be destroy part of the brain. 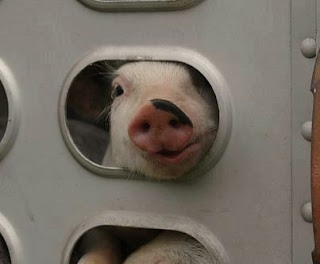 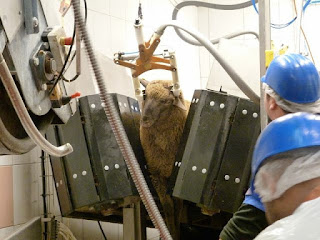 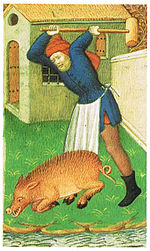 Direct blow to skull using a club or poleaxe .The blow must be dealt with precision and fore ,so that the skull is immediately smashed, causing instantaneous unconsciousness. In cattle  the aiming point is in the middle of the forehead in line with the ears, where the skull is thinnest. Horse have thinner skulls and are therefore easier to stun by this method In sheep and goat the brain is more easily reached from the back of the neck. Pigs have a well-developed frontal  cavity so the blow should be aimed slightly above the eyes.

A bolt held in the correct position by the mask is driven into animal's brain by the hammer blow. The device is usually fitted with a spring which returns the bolt to its original position.

e) Free Bullet Fired From a Pistol Into The Skull:- It a effective but unsafe. This method has been used on horses and cattle.

Sheep or goat is first securely held on its back on the ground by two or three men while the mouth is grabbed tight and drawn backwards to stretch the neck. The slaughterer then cuts the throat transversely with a series of strokes half -way deep into the neck. Blood id allowed to drain off until the animal is motionless or dies. The head is then severed off completely. 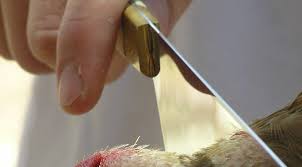 The Jewish method of slaughter called shechita cannot involve pre-slaughter stunning at all. Its proponents say the technique learned by practitioners over seven years of training meets the European Union's requirement for stunning in that it brings insensitivity to pain and distress. They argue that a surgically sharp instrument, twice the width of the animal's neck and known as the chalaf. is sufficient because of the speed and expertise with which is applied. 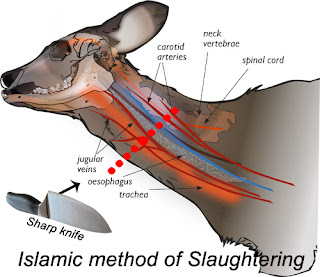 Halal method is also called Islamic method of slaughtering. Muslim/Mohaammedan method of slaughtering is controlled by local Islamic authorities(mufti, mulla).In this method mulla offers prayers" ALLAH AKBAR". The head of the animal should be turned towards Macca and a transverse throat incision is made by a sharp knife cutting all the soft structure in the neck. The Islamic form of slaughtering animals or poultry, dhabiha, involves killing through a cut to the jugular vein, carotid artery and windpipe. Animal must be alive and healthy at the time of slaughtering and all blood is drained from the carcass. Jhatka slaughtering is the method of slaughtering animals for meat prescribed within the Sikh religion. It is practiced on sheep and goat cattle are regarded as sacred by both Sikh and Hindus and are not eaten. Jhatka slaughtering involves instant decapitation. The head of the animal is held securely ,or fastened to a rigid pole or other object. The hind legs are held away by hands. The head is severed with a heavy, sharp cutlass in a single stroke.