Food Allergy
"Food allergy is an abnormal response to a food triggered by the body's immune system. "Allergic reaction to food can cause serious illness and ,in some cases ,death. If you have food allergy ,it is important for you to work with your healthcare provider to find out what food cause you allergic reaction.

Food allergen
A normally harmless substance that triggers an allergic reaction. Most of the allergens are proteins(an exemption is a sugar molecule which cause mammalian meat allergy) and there are generally several kind of allergens in each food, it is not yet clear what makes some foods proteins allergenic, and not others.

The development of an allergy occurs in two stages:

When a person first eats the allergen and produce antibodies(IgE or immunoglobulin E), which arms the immune system. IgE ,is a type of protein that works against  specific food.

When the person eats the allergen again, the allergen triggers the now armed immune system, which leads to the allergic symptoms.

Which foods may cause allergy?
More than 120 foods have been described as causing food allergies. However the 8 foods that most commonly cause serious allergic reactions. 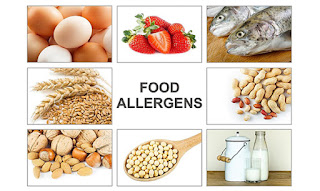 1)Celery
This include celery stalk, leaves, seeds and the root called celeriac .You can find celery in celery salt, salad, some meat products, soups and stock cubes.

5)Fish
You will find this in some fish sauces, pizzas ,relishes, salad dressing, stock cubes and sauce.

6)Lupin
Lupin is a flower, but it's also found in flour .Lupin flour and seeds can be used in some type of bread, pastries and even in pasta.

7)Milk
Milk is a common ingredient in butter, cheese, cream, ice-cream, milk powder, and yogurt.it can also be found in foods brushed or glazed with milk, and in powdered soups and sauces.

8)Mollusca
These include mussels, land snail, squid and whelks but can also be commonly found in oyster sauce or as an ingredient in fish stews.

11)Peanuts
Peanuts are actually a legume and grow underground also called as groundnut. Peanuts are often used as an ingredients in biscuits, curries, desserts, sauces as well as in groundnut oil and peanut flour.

14)Sulphites
This ingredients often used in dried fruit such as raisins, dried apricot etc.
If you have asthma ,you have a high risk of developing a reaction to sulphur dioxide.

What are the symptoms of food allergies?

The most frequent symptom of food allergies are itching and swelling of the mouth. Oral itching can be an initial symptom in any kind of food allergy.

The eyes and nose may show hay fever-like symptoms. The conjunctiva of the eye may swell dramatically and become itchy and red. Sneezing an itchy and runny or stuffed nose may be experienced.


Facial oedema
Swelling under skin usually affect lips, eye lids and ear. In some patients even cheeks. The symptoms are scary, but never life-threatening by themselves.

Lungs
Asthmatic symptoms such as wheezing, breathlessness and coughing may arise from the lungs.

Gut
Symptoms from the gut include pain, bloating, sickness, vomiting and diarrhea. 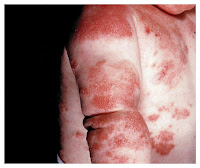 On the skin, acute urticaria with itchy, well defined white or pale red swelling can appear. This rash is generally short-lived, disappearing within a few hours. Chronic nettle rash is rarely associated with food allergy.

Anaphylaxis is an acute allergic reaction in rare cases, multiple organ systems are affected and death can occur in as little as ten minutes.

"Avoidance of the allergic foods is the only protection".

If you have any doubt please let me know...

Why FSSAI Has Changed The Logo For Non-Vegetarian Foods?